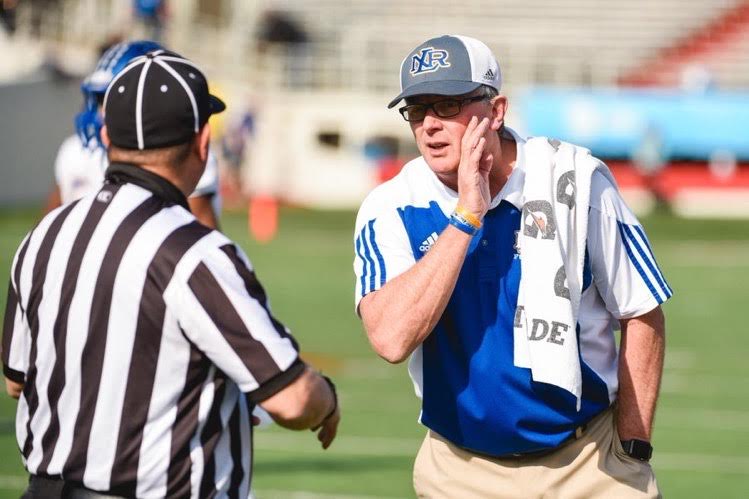 Back in May, North Little Rock lifer and former defensive line coach Randy Sandefur took over the Charging Wildcat football program becoming the school’s third head coach in as many years.

Sandefur has seen the program at the highest of highs and lowest of lows and played a major part in rebuilding the program from 2007-14 during the Brad Bolding tenure, then continuing from ’15-19 with Jamie Mitchell. Under Mitchell NLR reached the state title game in 2016 losing to Fayetteville, then avenged that loss the following season defeating Bentonville 44-37. Since that time North Little Rock has reached the title game every season, but fallen victim to the Bryant 3-peat.

When Mitchell left to take another high school coaching job in Alabama after the 2019 season, long-time Arkadelphia state champion coach J.R. Eldridge accepted the position and it appeared the Charging Wildcats had locked in their man for the future.

Amidst dealing with COVID-19 precautions, along with off-field issues pertaining to his contract, Eldridge was still able to lead the Charging Wildcats to a 12-2 season and another trip to the state championship.

Reports surfaced in late January that Eldridge had emerged for the Farmington job after long-time head coach Mike Adams (Eldridge’s high school coach at Fayetteville) retired. It was confirmed on January 11th Eldridge would accept the position, and it became official on January 25th when the Farmington School District Board of Directors voted.

For the next four months, multiple candidates were rumored for one of the top jobs in the state and plenty of questions went with it as the job opened and closed three different times. Sandefur was ultimately hired in late May and North Little Rock was now ready to move forward.

The hiring process was complete, but spring practice was essentially over and we were three months away from a new season beginning. The Wildcats still had plenty of talent, but would the players be able to overcome the adversity of another coaching change?

So far they have answered that, mostly in dominating fashion. After defeating El Dorado in a preseason scrimmage 38-28, the Wildcats are currently 3-0 taking down Springdale Har-Ber 58-28, Fayetteville 14-7, and West Memphis 41-0. They held Fayetteville and West Memphis to a combined 295 yards while playing away from home including a stellar -9 yards rushing in both games.

Junior Malachi Gober has taken over for Cotton and has completed 35 of his 70 passes for 497 yards and 7 touchdowns. Seniors Johnny Lewis and Felix Wade along with junior Torrence Moore are seasoned skill position players who have helped Gober’s development in his first year under center.

Defensively, it all starts up front with college prospect Braxton Johnson who currently has division 1 offers from Arkansas-Pine Bluff and UT-Martin. Behind him is one of the better linebacking corps in the state with Davian Vayson, Marcus Stovall, and Tavion Atkins while Josh Thrower and Maumelle transfer Jaylen Pettus have combined for three interceptions in a secondary allowing just 191 yards throw the air.

The Charging Wildcats hope to continue the success as they begin play in the rugged 7A Central, starting with a struggling Central team this week. They will open the first two weeks of October with games against Conway and Little Rock Southwest before finishing the final three weeks against two currently undefeated squads in Fort Smith Northside and Cabot with 2-1 Bryant sandwiched in between.