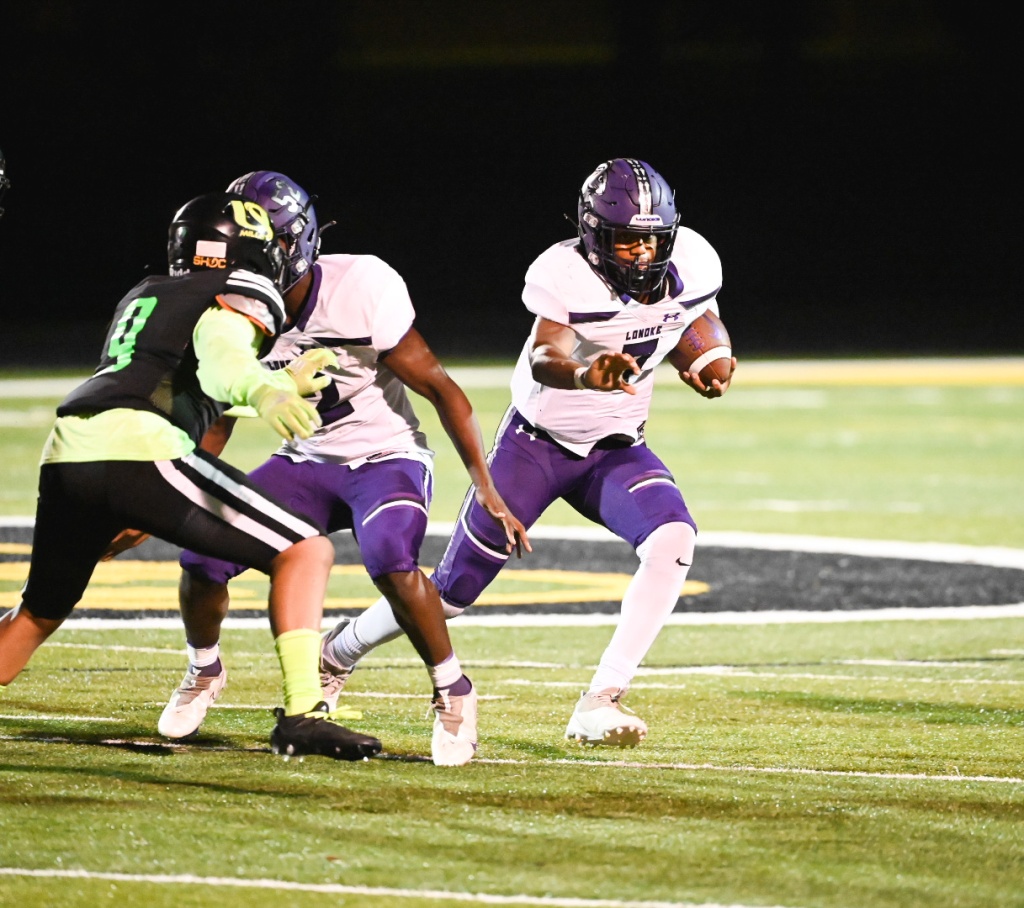 After both beginning the season 5-0, the Mills Comets and Lonoke Jackrabbits faced off Friday night looking to rebound from losses last week to keep pace with Stuttgart for the top spot in 2-4A.

Lonoke took control of the game late in the first quarter and did not look back. “I challenged our kids all week for them to know we have to go prove something,” Jackrabbits head coach Harry Wright said. “Everybody picked us to lose this game coming in and the way we played last week we really tried to put a chip on our shoulder and show people what we can do when we execute and do what we do.”

It took some warming up for the Jackrabbits to get the execution on point going three and out on their first drive and then an 8-play sequence that ended on 4th &13-prior to that drive, there was some confusion when Mills punted from its own 15 and Lonoke muffed it while attempting to receive and it was recovered by the Comets at the Lonoke 42. After some discussion from the officials, Mills re-punted and the Jackrabbits had good starting field position at the 50.

After a defensive battle, the Jackrabbits struck first with 1:14 remaining in the first quarter when sophomore quarterback Bradon Allen scored from 5 yards out following a 12-yard gain on 1st & 20 by Spencer Pepper to make it 7-0.

Mills star running back Jabrae Shaw, who was slowed by an ankle injury and did not see much time, converted a 4th & 2 on a 17-yard gain during the ensuing drive, but the Comets were not able to respond getting back-to-back short gains and then two straight incomplete passes.

Lonoke took advantage when it got back on offense, with the help of a fumble that bounced forward about 12 yards out of bounds on 2nd & 11 for a first down plus more strong running from Allen who capped the drive with a 22-yard gain followed by another 5-yard score to make it 14-0 with 6:08 left in the second half. Allen was able to lead his squad to one more score before the break, this time on a 40-yard heave that was tipped and caught by Chaston Dockery at the Mills 5, he then stepped into the end zone for the score extending the Jackrabbit lead 21-0 with just over a minute left.

Mills did force Allen to fumble on Lonoke’s 2nd drive on the third quarter but were not able to do anything with it. However, the Comets did get an 11-yard sack on 4 & 7 then got a major spark on the following play when Daniel Brown Jr. took off 43 yards for the score giving his team a chance to get back in it 21-6 after the failed 2-point conversion with 3:15 left in the third.

“I started hurting there at the end, then I fumbled the ball but knew I had to finish it,” Allen said.

Pepper began the next drive for Lonoke at quarterback and had two 9-yard runs, along with one for 18, before Allen came back in to put a thrilling finish to the drive (and essentially the game) on a 42-yard run for his final score of the night.

Asked what was going through his mind when he came back in the game: “I had to go put the ball in the end zone….that’s all.”

Mills fought hard in the closing seconds of the third to try and make something happen, but failed on 4th & 12 only gaining two yards. Lonoke put one more touchdown on the board on a 5-yard scamper by Pepper. The Comets were driving late to get a final last score of their own, but Latrell Burnett ended those hopes intercepting Achilles Ringo’s pass taking it to the 32 of Lonoke where the Jackrabbits would get in victory formation to seal the game 35-6.

Lonoke (6-1, 3-1) will head back home to play struggling Central Arkansas Christian next week before welcoming Stuttgart on October 29th for what should be the 2-4A title game. Mills will play Stuttgart next Friday at Comet Stadium.

You can view the game photos here: